Vision
Families will be empowered to require services that respect and nurture all
aspects of each individual’s unique character regardless of age or infirmity. All nursing home residents will live a life of quality and dignity.

Values
• We value all people, regardless of age or loss of capacity, as human beings worthy of respect and deserving of dignity.
• We value self-determination as achievable for every person.
• We value the support of families in enabling each person to express one’s rights, needs, choices, and preferences, when that person is no longer able to do so for oneself.
• We value nursing facilities which strive to achieve true quality of life and quality of care for each individual resident, founded on the concepts of self-determination and family advocacy in the exercise of each resident’s rights.
• We value honesty, integrity, and good stewardship of all resources, human and material; in the conduct of both professional and personal business.

About Our Mother's Voice

After the Storm
Mixed Media on Canvas by Carol J. Hay 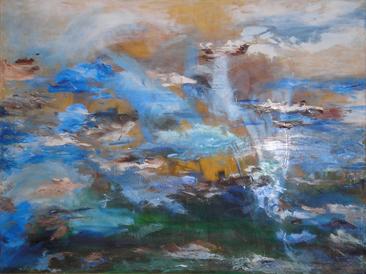 Our mother was a lifelong activist for social justice for those without a voice. Dementia took her ability to talk, and she found herself a member of a group without a voice: nursing home residents who cannot speak for themselves when something is not right. Her non-verbal communication with us, her daughters, was very clear to us, however; and called us into action, to advocate for this group without a voice, to carry Our Mother’s Voice.

Our Mother’s Voice provides information to families of nursing home residents to empower and equip them to advocate for quality of life and quality of care which goes beyond traditional custodial care to encompass the achievement of maximum physical, spiritual, social, mental, and emotional health for each resident.
​

Moving into a nursing home changes everything.  But life should be good, even if different than before.

In August 2009 our mother was admitted to a nursing facility with symptoms of dementia which could not be controlled in our parents’ home. Our mother had been diagnosed with “pre-senile dementia” several years earlier, but had managed at home with our father until a sudden and severe decline in her mental capacity. Her speech had been “scrambled” for months, but quickly became very difficult to understand. She could not make her needs or thoughts known. She was in an unfamiliar environment, with no way to talk to the strangers who were providing care for her. Being an assertive woman who had always advocated for the rights for others and for herself, she used the only means available to her – her nonverbal behavior. She protested what she did not like or understand by physical resistance, which staff in turn treated as “agitation” and “noncompliance.” Her daily existence was an unpleasant experience for her and for her caregivers, the staff of the nursing home. Ultimately, she was treated by a medical doctor specializing in gerontological psychiatry, who balanced the production of brain chemicals through the use of medications. After several months of difficult experiences, our mother stabilized. Her daily life at the nursing facility continued to be a struggle. Our mother was used to having activities and experiences which were not a part of the facility’s routine. She wanted to do things that were not the way staff had always done things. Working with the staff to make changes that would accommodate our mother was challenging; it meant that the things they had “always done,” they were being expected to do in a different way. It was a continuing process which was at times difficult for all. And meantime, every day, our mother was not having the kind of experience we wanted her to have.

One day, while the family was discussing the difficulties we were having in getting the changes to happen, my sister mentioned that our mother had been a lifelong activist for social justice for those without a voice. If someone had asked her, years ago, if she would endure these difficulties for the outcome of a better quality of life for all people in nursing homes, she would have said Yes. She was just that kind of person.

A few days later, on March 19, 2010, our mother was letting me know of another concern she had. She was able to get out the words “I’m sorry.” She was telling me she was sorry she couldn’t do for herself; sorry that she was creating difficulty for her family. I replied that she had nothing to be sorry for, and that I was sorry it was taking us so long to work for things to get better for her. I assured her that we were working hard to fix what we could fix, and that she and other people would have a better experience when we succeeded. I told her she was being a strong advocate for the people who live in her facility, just as she had advocated for civil rights in the 1960s. I reminded her of her advocacy work, and told her that her two daughters were making sure she was still advocating. We were being her voice.

In that instant, we realized we had a mandate from our mother. She didn’t ask us, or task us to be her voice; we simply knew that we had been called to be Our Mother’s Voice. We had to take up our mother’s role as activist, and speak out for the group she now found herself a part of. We had to do what we could to make sure the voice of people in nursing homes who can’t speak out was heard.

Our Mother’s Voice was born.